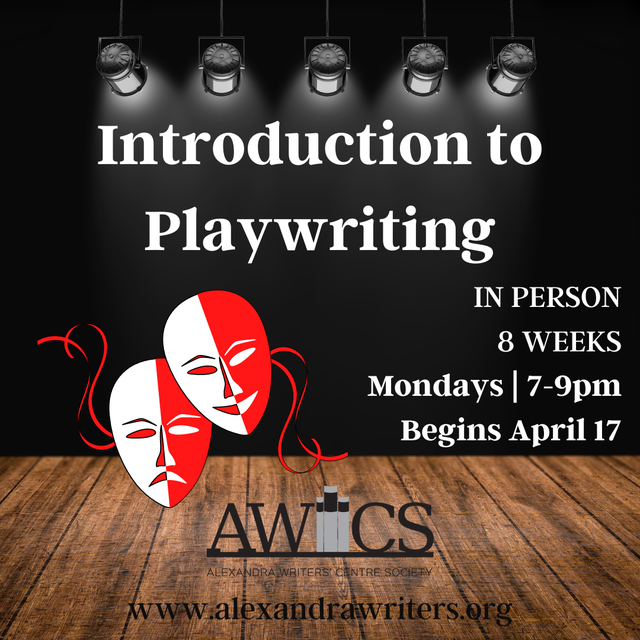 IN PERSON Introduction to Playwriting

Join professional playwright Caroline Russell-King to make magic for the stage. No matter the genre - comedy, drama, sci-fi or fantasy - anyone can learn how to turn prose into playscripts. After writing professionally for 40 years Caroline has many tips, tricks, secrets and hacks for dramatic writing. Find out what it takes to get your work from the page to the stage. This course is also great for novelists and short story writers who want to work on dialogue.

This class take place in person at the Alexandra Writers’ Centre in Calgary.

In 2022, Caroline Russell-King's play Selma Burke (written with Maria Crooks) was a finalist in the Sharon Pollock playwriting competition. Her play High and Splendid Braveries was named one of the best productions in Calgary in 2022. An award-winning playwright, she has written 31 plays which have had 62 productions across Canada and the USA. Currently she is the co Canadian ambassador for the Dramatist Guild of America. She is a member and past vice president of the Playwrights Guild of Canada. She is published in five anthologies and her latest trilogy of plays Palliser Suite was published by Frontenac House Press. Caroline has adjudicated plays nationally for contests and publishing houses. She also served on the board of the Alberta Playwrights’ Network. She also wrote Strategies - The Business of being a Playwright in Canada (with Rose Scollard) published by the Playwrights Guild of Canada.

Working as a professional dramaturg. She is the CEO and founder of Dramaturgy on Demand working weekly with playwrights in Canada and the USA. Caroline is a member of the Literary Managers and Dramaturgs of the Americas. She has worked in new play development and as a freelance dramaturg and literary manager for 40 years. She is currently working with her editor on her second non-fiction book Do it Yourself Dramaturgy.

As a theatre critic, Caroline pioneered the Postcard Review and Postcard Profiles as well as writing traditional interviews and articles. She served on juries for the Betty Mitchel Theatre Awards and The Calgary Theatre Critics Awards. She is also a member of the Canadian Theatre Critic Association.