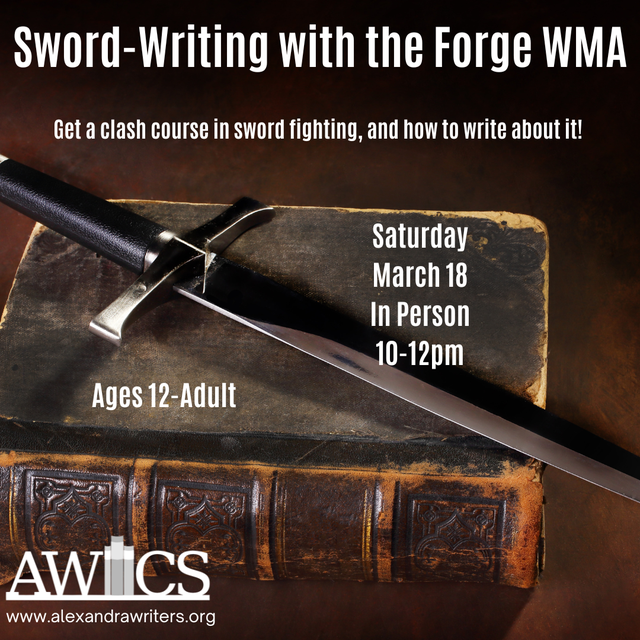 IN PERSON Sword-Writing with the Forge WMA

This class is open to ages 12 to adult.

Get a clash course in sword fighting, and how to write about it!

Join author and martial artist Alex Williamson, and The Forge WMA's head coach, Mark Winkleman, as they discuss the technical foundation of sword fighting, different weapon types, common mistakes, and historical accuracy. Participants will have the opportunity to handle and demo a variety of swords. Each section will be accompanied by a short, evolving writing prompt, so by the end of the session participants will walk away with a short fight scene in hand.

This class takes place in person at the Alexandra Writers’ Centre in Calgary.

Alex Williamson has mostly built his life around books and fighting people. He has a collective 17 years experience in sport fencing and Historical European Martial Arts, with 8 medals nationally and internationally. He has eleven short stories published, and his first book of poetry, Very Bright, Almost Pretty, was released by Frontenac House Ltd. in 2020. And yes, the book has poems about sword fighting.

Mark Winkleman has been training martial arts nearly 18 years, with the past 14 as an instructor. He is a co-founder of The Forge: Western Martial Arts, and served as its first president. He is an experienced practitioner of both European and Japanese martial arts, and has competed and studied Internationally, as well as taught many workshops in Alberta. He has medalled over 20 times in provincial HEMA competition, and has appeared as an expert on multiple television shows such as Man on a Mission, Shaw TV, and NUTV.

Mark is a tireless researcher of historical combat systems, holding ranks in longsword, messer, dagger, rapier, and grappling, in addition to long experience with classical (koryu) Japanese sword arts. In the past decade, he has added Judo to his training regimen. A dedicated educator, he seeks to further the knowledge and skill of both himself and his students, while raising the profile of HEMA in the general public.

Lexa Giguère (soft G, hard g) is a certified personal trainer and 2nd year student at Mount Royal University. Lexa has been involved in sports from a very young age including swimming, rhythmic gymnastics, horseback riding and boxing. Currently her focus is Historical European Martial Arts and Olympic weightlifting. She has been a part of The Forge and its tournament fight team for five years.