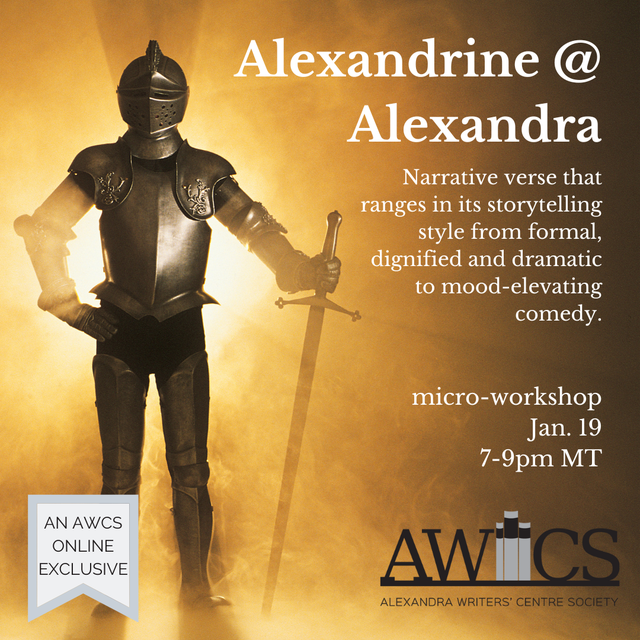 Alexandrine began as French heroic verse. Alexandrine metre was first used in a collection of 12th century medieval romances in which Alexander of Macedon was the proud, heroic and chivalrous hero. These days Alexandrine’s narrative verse ranges in its storytelling style from formal, dignified and dramatic to mood elevating comedy.  Alexandrine meter was invented in the cadence of the French Romance language. When Alexandrine’s are written in the English language its extra-long metre has a rare and powerful effect.

This is an interactive online class using the Zoom web platform.

Jade O’Riley has spent many years learning the art and language of poetry. In 1996 Jade went to New York – the first year April became dedicated as National Poetry Month – and immersed herself in the poetry world; taking classes, going to uptown and downtown readings, spending hours writing at Poets house. Inspired by her time at Poets House Jade’s dream to open a Poets library in her home city began to germinate. In New York she also completed her first full-length poetry manuscript, “56 Days in the History of Love” which was then published by Mellen Poetry Press in New York. In 2007 Jade started teaching poetry At City Arts; she specializes in classic poetry forms and created a poetry editing technique called Poets Toolbox. In 2014 she opened Edmonton Poets House for library hours and poetry reading events. In 2019 Jade’s relocated to Calgary and took her City Arts poetry classes with her online; she also began teaching with Alexandra Writing Centre.