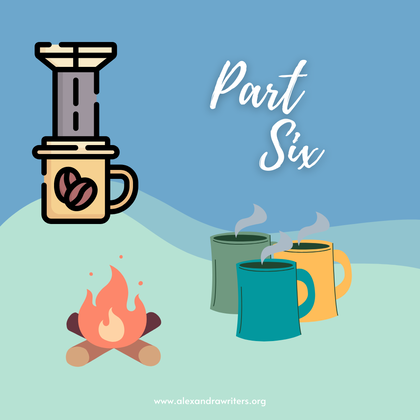 Jason unscrewed the filter cup and put a round white filter in, then poured water over it.

“First you want to remove the impurities,” they said. “The bleaching process is just about the worst.” They sang the last word in a high, quavery way like they were auditioning for The Darkness.

Lilly grabbed her cellphone from where she’d set it on a stump.
“Wait, let me take a video! You’ll go viral... glamping coffee, Jay Jay styles!”

Jason continued the ritual, grinding beans in a silver hand-grinder that purred as they whirled its handle and measuring a precise amount of beans into the Aeropress chamber, all the while narrating like it was their personal episode of the Chef’s Table.

Wincing, Daniel remembered his dad’s diatribe against those feminine complications that could ruin a manly camping experience. How much would he hate this right now? How would he react to Jason? How would he judge Daniel’s reaction to Jason, for that matter?

As Jason pressed a tin cup into his hand and he tasted his first sip of truly excellent camping coffee, Daniel felt something else. It could have been the rush of flavour, the caffeine’s quick lift, or the way the light seemed to brighten around him. It could have been the nearness of Lilly, the contagious (in spite of his mood) buoyancy of Jason, or an overdose of fresh air.

Whatever it was, Daniel felt something different. A lack of weight, as though he’d been wearing a Hudson’s Bay blanket over his head all along and someone had just pulled it off of him. He took a deep breath. His spine lengthened.

Daniel felt the absence of his father at the campsite.

In the moment before he recognized the feeling for what it was, and felt a pang of guilt – it felt oddly terrific.

Daniel must have been making a face. When he looked up at Lilly, she beamed at him and put her arm around Daniel’s shoulder affectionately.

Jason’s smile widened, their sparkletooth glinting. “If you like that my friend, just wait ‘til you taste my prosciutto and rosemary Croque Monsieur!”

Thank you! We hope you enjoyed the story and had fun exploring cSpace.
Want to become a better storyteller? Join us at AWCS and meet our welcoming and warm writing community!
​Stop by the office on the 4th floor or leave us a comment below. We'd love to answer all your writerly questions.