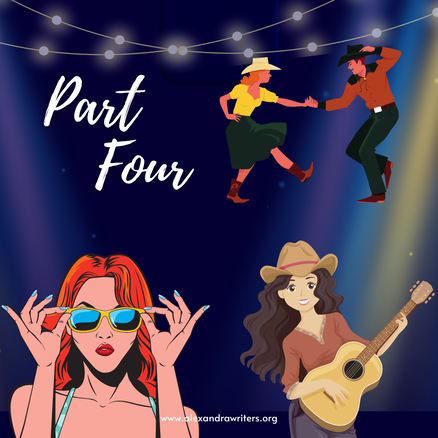 Maybe it was nurture… maybe it was nature. A hatred of pop country that dug right down to genetics. Why did people like it? Did the grating twang and deep fake bass break your double-helixes so they’d heal together broken and inexplicably, you’d start enjoying this music?

Daniel looked at Lilly, shook his head, and smiled sadly. “I’m sorry. Could we leave soon? This music is… medically violating.”

Lilly looked disappointed. “We’ve only been here for like two songs. I haven’t even finished one beer. Come on Daniel. Don’t be so… lame.”

Her words stung, though her word choice reminded him that she was, possibly, too young for him. That was another sting. A drunken wasp crawled across the table beside him, supping spilled beer. Lilly had to do the stinging for it.

He looked down and her big eyes were gazing up at him. She looked like a Margaret Keane painting.

Lilly smiled, took a breath, and released her attention from Daniel, taking in the action they were staying to enjoy. Three men in identical factory-pressed snap shirts were hooting at the round of shots that had just arrived; the waitress, in a jean mini-skirt that failed to cover the bottom of her bottom (but in its defence, it probably wasn’t trying), was vending candy-coloured plastic shot glasses one-by-one on the table. They looked like a string of lights. Daniel thought again of leaving the tent, of the midway lights outside, and frowned.

“Do you think my hair would look nice like that?” Lilly was eyeing the same waitress. She had that fake colour of red hair, a mix of fire engine and cherry red that either looks hip or horribly cheap, depending who’s wearing it. Lilly’s hair was presently a mix of Pantone browns, somewhere between Cheshire Farmhouse and Doctor Pepper. He hoped she wouldn’t change it.

“Your hair would look nice any way you like it,” Daniel intoned, standing a little closer.

“Aren’t you agreeable,” Lilly teased. “You deserve another drink. My treat.”